Promises and prizes are the heart of communication. Like music fans who need a melody to follow, or movie watchers who trace a storyline, readers need both periodic promises of evidence to come and the fulfillment of those promises.

If we fail to make tantalizing promises to pique their interest, or if we neglect to award the prizes that we’ve promised, our readers will go in search of a better deal.

The red text above buries its promise in vague and inconsequential language. The green text makes robust claims about the very same subject matter and in the same number of words makes promises and delivers prizes.

Three Billion Canaries in the Coal Mine

What does it mean for us that birds are dying? And what can we do about it? 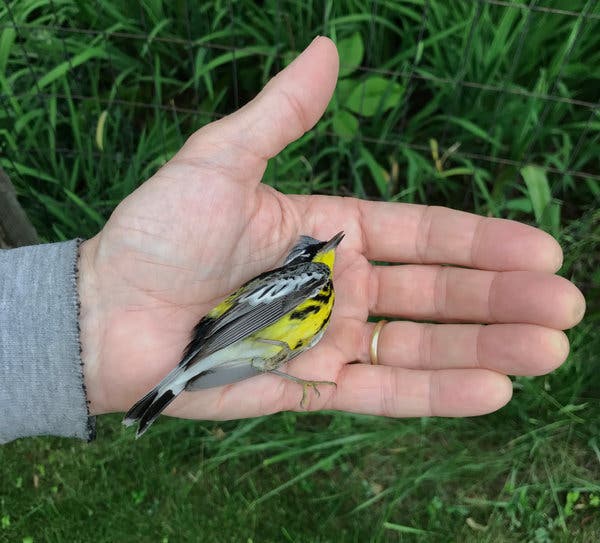 A Magnolia Warbler found recently on a suburban lawn in the northeast.

In the opening paragraph,
look for promises in green and prizes in blue.

NASHVILLE — During the nearly quarter-century that my family has lived in this house, the changes in our neighborhood have become increasingly apparent: fewer trees and wildflowers, fewer bees and butterflies and grasshoppers, fewer tree frogs and songbirds. I told myself the changes were circumstantial and part of our increasing urbanization. To provide a way station for migrating wildlife, I put up nest boxes for the birds and let wildflowers bloom out before mowing. I trusted they would be fine once they got out of Nashville to rural Tennessee. I was wrong.

A new study in the journal Science reports that nearly 3 billion North American birds have disappeared since 1970. That’s 29 percent of all birds on this continent. This is not a report that projects future losses on the basis of current trends. It is not an update on the state of rare birds already in trouble. This study enumerates actual losses of familiar species — ordinary backyard birds like sparrows and swifts, swallows and blue jays. The anecdotal evidence from my own yard, it turns out, is everywhere.

You may have heard of the proverbial canary in the coal mine — caged birds whose sensitivity to lethal gasses served as an early-warning system to coal miners; if the canary died, they knew it was time to flee. Ornithologists John W. Fitzpatrick explains, “Birds are indicator species, serving as acutely sensitive barometers of environmental health, and their mass declines signal that the earth’s biological systems are in trouble.”

Unlike the miners of old, we have nowhere safe to flee. Nevertheless, the current administration has been rolling back existing environmental protections faster than environmentalists can respond to the ceaseless bad news.

Hundreds of black citizens were killed in Elaine, Ark., a century ago this week.
By Nan Elizabeth Woodruff
Sept. 30, 2019 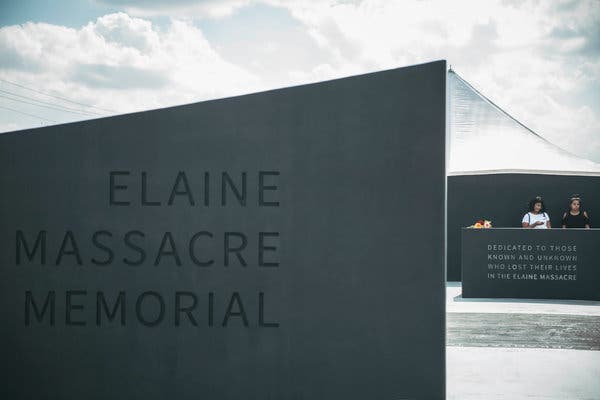 Attendees view the Elaine massacre memorial at a dedication on Sept. 29.

One hundred years ago this week, one of the worst episodes of racial violence in American history unfolded in Elaine, Ark., a small town in the Mississippi Delta. Details remain difficult to verify. The perpetrators suppressed coverage of the events, and the victims, terrified black families, had no one to turn for help. In fact, local police were complicit in the killing of untold numbers of African-Americans.

The Elaine massacre took place in a region, the Delta, that defined itself by its violence and oppression. One African-American, William Pickens, described the Mississippi Delta as “the American Congo.” Elaine, though an isolated plantation region, was part of the broader social upheaval following World War I that came in the form of massive strikes and racial confrontations, both at home and abroad.

In Elaine, in the early fall of 1919, a different struggle for democracy was taking place. Emboldened by their war experience, African-American veterans returned to the Delta to demand the full rights of citizenship and justice, not only before the law but also in their labors. In Phillips County, this struggle directly challenged planter dominance.

The town was at the center of a rapidly changing lumber and plantation economy known for harsh working conditions. Sharecroppers worked the land for a small share of the crop and were forced to sell their cotton to the landowners, who paid less than market prices. Workers also had to buy food, clothing, household wares, tools, seed and fertilizer at the plantation commissary, which charged exorbitant interest rates. It was a system intended to keep black people in debt and dependent upon planters. Legal disfranchisement stripped them of the vote and an ability to share in any benefits of citizenship.

What Kind of Problem Is Climate Change?

Knowing the answer might force us toward a real solution.
By Alex Rosenberg
Sept. 30, 2019 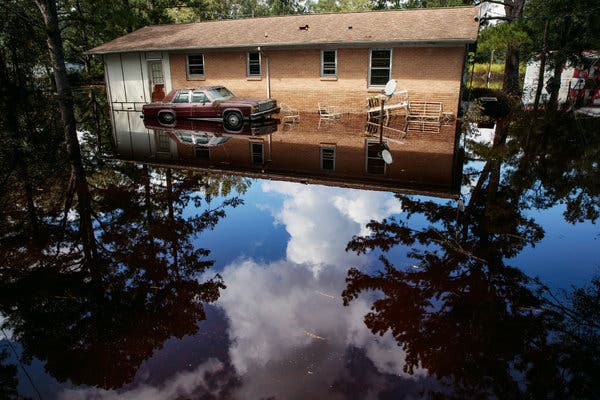 Blue sky reflected in the floodwaters of Hurricane Florence

If the summer heat, followed by Hurricane Dorian, hasn’t convinced you that climate change is real, probably nothing will. Those of us convinced will want to mitigate it if we can. Doing that requires understanding the different kinds of problems climate change presents. They are economic, political and philosophical. The three kinds of problems are inextricably intertwined. That’s one lesson taught by the relatively new discipline of politics, philosophy and economics (PPE).

PPE has been the name for this subject since it was first introduced at Oxford after World War I. Now it’s taught at a hundred or more American universities, combining intellectual resources to come to grips with complex human issues.

To recognize the problems facing any attempt to mitigate climate change, we need to start with a technical term from economics: “public good.”

Put aside the ordinary meaning of these two words. In economic theory, a public good is not a commodity like schools or roads provided to the public by the government. It’s a good with two properties absent in other commodities, including schools and roads. First, a public good is consumed non-rivalrously: No matter how much of it one person consumes, there’s always just as much left for others.

Street lighting is an example: When I consume as much as I want of the nighttime safety it provides, there is still as much left for you. We are not rivals in consumption of a public good. Public schools aren’t public goods in this sense. The more attention your child gets, the less time the teacher has for mine.

Second, a public good is not excludable: There is no way I can consume street lighting without its being available to you at the same time. The only way to exclude you from consumption is to turn it off. But then I can’t consume it. Public schools are excludable goods. Your child can be expelled. So schools are not public goods.

The Paris climate accord set a target of keeping global temperatures from rising more than 1.5 degrees Celsius. That outcome would be a public good. I can’t consume any of this good unless it’s there for you too, and no matter how much of it I consume in personal benefit, that won’t reduce the amount you can consume.

Of course, as with street lighting, some people will benefit more, maybe even much more from a public good, than others. It’s regrettably true that women’s lives are generally more improved by street lighting than men’s lives are. Mitigating climate change isn’t going to benefit everyone equally. But it can’t benefit anyone without benefiting everyone, and no matter how much I benefit, there will be some benefit left for you.

This is where politics and philosophy come in. As with all other public goods, limiting climate change is subject to what is called a prisoner’s dilemma: If the rest of the world’s major polluters get together to curb emissions, the United States doesn’t have to and will still benefit. On the other hand, if China, the European Union, India, Russia and South Korea do nothing, there’s no point in the United States even trying. It can’t solve the problem alone. It looks as if either way, the United States should do nothing to curb its own emissions. If leaders of these other governments reason the same way, the result is likely to be catastrophic weather extremes everywhere.

At a Cambodian Lake, a Climate Crisis Unfolds

A trifecta of climate change, hydropower dams and illegal fishing are threatening the Tonle Sap, and the people who rely on its fish.
By Abby Seiff
Sept. 30, 2019 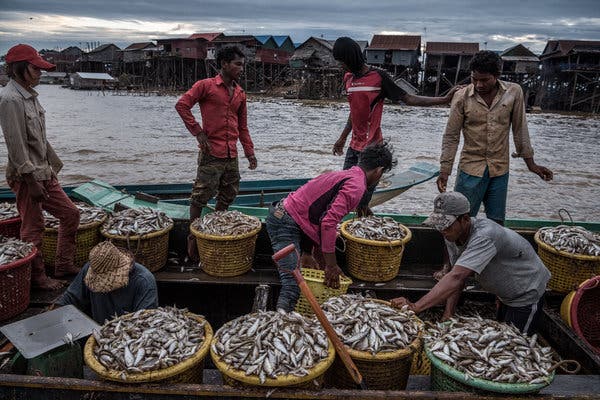 Fishermen unload their catch in Chong Khneas, a village on Tonle Sap lake
in December 2018. The region has been heavily effected by drought.

When I first met Ly Heng in May 2016, the forest behind his house was still smoldering from the fires brought on by the worst drought to hit Southeast Asia in decades. Heng lived along a small river at the top of Cambodia’s Tonle Sap Lake, in a protected area known for its rich biodiversity. At 45, he had never seen wildfires, and never seen the water level of the lake dip so low. Charred sticks and leaves crunched underfoot while Heng led me through the woodland, recounting his neighbors’ efforts to keep the fire from incinerating their houses.

Tonle Sap Lake is the largest body of freshwater in Southeast Asia. Its wetlands support critically endangered species like the Bengal florican; its sediment provides nutrients for croplands; its fisheries are among the largest and most biodiverse in the world. And it has reached a tipping point.

Just three years after the 2016 drought, another hit the region earlier this year. Local and global leaders should agree to stem the mushrooming of environmentally destructive hydropower dams, combat illegal fishing and mitigate the impacts of global warming. If such action is not taken soon, the Tonle Sap’s days are numbered. With it will vanish an ecosystem that has supported millions of Cambodians and their neighbors for centuries.

Like the Mekong River as a whole, Tonle Sap Lake is beset by problems both local and global. In recent years, a trifecta of climate change, overfishing and the creation of new dams has threatened to unmake the Tonle Sap.

This year, the rains didn’t arrive in May, or June, or July. They didn’t come until August, borne on a series of storms so powerful that thousands had to be evacuated. The Mekong River reached a grim milestone: It dipped to its lowest levels since modern recording began.

Each time the Mekong reaches a new low, the pulse that keeps Tonle Sap Lake alive slows. This year, according to officials, the water in the Tonle Sap River reversed course in July — about two months late. Soon, the only river in the world to reverse seasonally may not switch direction at all.

4 Responses to Promises and Prizes