Gerrymandering has been in the news a lot in the last year or two, but unless you have a reason to pay attention, it may have evaded your notice. It’s important because it can make a vote meaningless and completely subvert the very American and democratic core value of “one person, one vote.”

Popular Vote. One person, one vote, winner takes all.
In a state-wide race for Governor, for example, there is only one district: the state. Whoever gets the most votes wins the district. If more votes go for the blue candidate than for the red candidate, the blue candidate wins. Everybody understands this version of democracy and everybody who believes in democratic rules believes this to be a “fair” outcome.

Representative Government. One person, one vote, every district is counted separately and sends one representative.
Representatives like members of a state House of Representatives are also chosen by popular vote, but each member represents a voting district, not the entire state. And the majority party is given the privilege of drawing the district maps however they wish, which gives them a very unfair advantage.

If the mapmakers know how regions, how towns, even how neighborhoods traditionally vote, they can create districts that are more likely to give their party a majority advantage. And once a party gains control of the House, they can make it nearly impossible for the opposition to ever elect enough representatives to overturn the House. 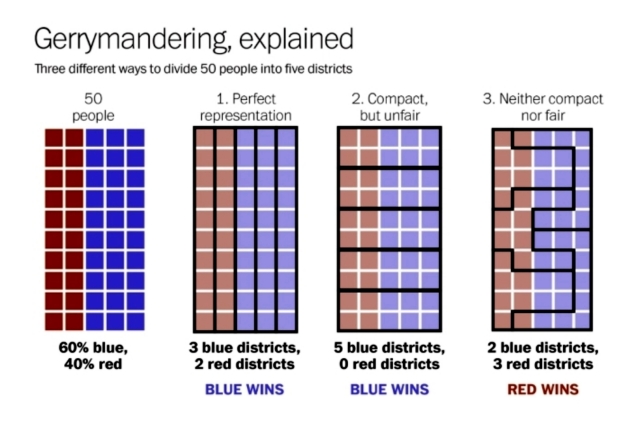 The column on the left represents a tiny State of just 50 voters, but it could just as easily represent 50,000 voters or 500,000 voters without affecting the process.

But if the Blue party is allowed to draw the maps, as in example 2, it can create 5 districts in ALL OF WHICH it has the majority, and 5 Blue candidates will join the House, virtually ELIMINATING THE EFFECTIVENESS all 20,000 Red votes.

If the Red party ever gains a majority in the House, it can padlock its advantage by GERRYMANDERING the districts as in example 3, by maximizing the effectiveness of all its 20,000 votes to win three districts. The two Blue candidates will be elected unanimously, but all the other Blue votes will be wasted in hopeless minority districts.

The strategy explained in just a few words. If you don’t get the most votes, but you do make the maps, create as many districts as possible in which you will win by just one vote, and let the other party waste their majority votes winning their seats in landslides.

Stephen Nass created the chart and posted it to facebook on FEB 21, 2015.